Free delivery on all orders to Mainland UK

With so many cordless saws to choose from, it can be hard to know the right one to use for your application and material. If you’re unsure about which saw to use in which scenario, don’t panic. We’ve gone through the most common types of cordless saws and broken down how they work and what they’re used for. 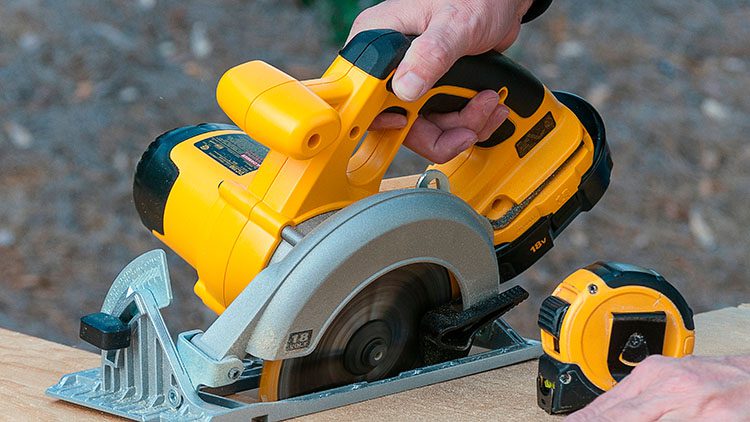 A rugged and dependable saw for use on many types of wood, cordless circular saws are the go-to saw for cutting large wood boards made from MDF or plywood. Designed to cut lumber both across the grain and with the grain, circular saws (also known as skill saws) are much more portable than some of the other variants we will be looking at.

The circular saw is a jack-of-all-trades saw when it comes to cutting wood and metal (if you have the correct blade). The guard on the base of most circular saws can be adjusted to any angle up to 45 degrees, enabling users to make a mitre cut. This plate is also height adjustable, facilitating different depths of cut.

However, despite their versatility, they don’t always leave the cleanest edge on a cut. The speed and direction of the cut are also completely controlled by the user, so cuts may not always be straight.

Ryobi’s 150mm circular saw is less than £90, making it around £30 cheaper than any comparable model from DeWalt, Makita or Milwaukee. Ryobi’s circular saw also offers users the ability to change the depth and bevel of the blade without the need for Allen keys or screwdrivers. 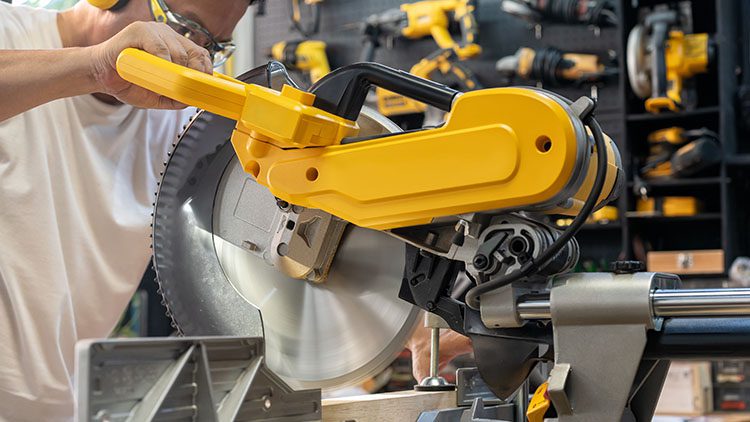 Like circular saws, mitre saws are circular blades with teeth used for cutting lumber and metal (again, with the correct blade). A mitre saw, however, is a fixed device with a base that allows you to accurately position the material for cutting. Both the cutting blade and the base of the mitre saw can be adjusted, allowing the user to efficiently make mitre cuts.

The addition of the fixed base plate means cuts from a mitre saw are more precise and leave a cleaner edge. The downside of mitre saws is their lack of portability and inability to cut larger pieces of material. The saw can only cut material within the blades’ reach, whereas a normal circular saw can be used on any size material due to it being fully handheld. Mitre saws are also designed to cut cross-grain only. 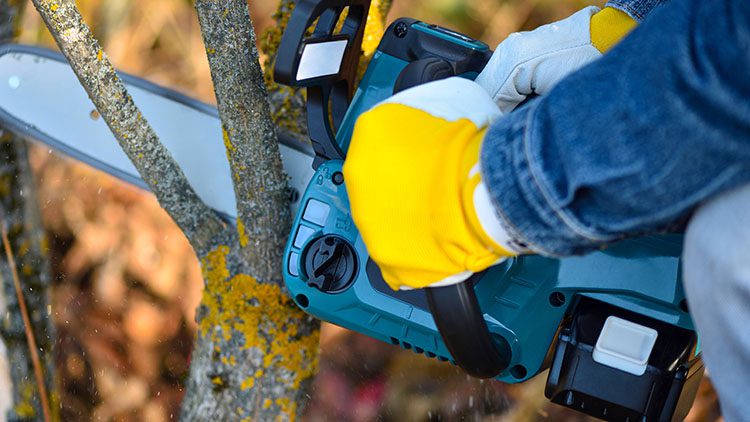 Chainsaws are heavy-duty saws used for cutting trees, hedges, and foliage. Compared to the previous two saws, chainsaws are not for precise cuts, but instead for cutting through the toughest wood as quickly and easily as possible.

Chainsaws, as the name suggests, are made up of a chain of teeth, rotating at incredibly high speeds. The teeth on a chainsaw are more robust than on most DIY or woodworking saws due to the nature of what they do. Chainsaws also need to be sufficiently lubricated as, without lubrication, the chain will seize up and stop spinning. Most modern chainsaws will have an oil reservoir which automatically feeds oil onto the chain when required. 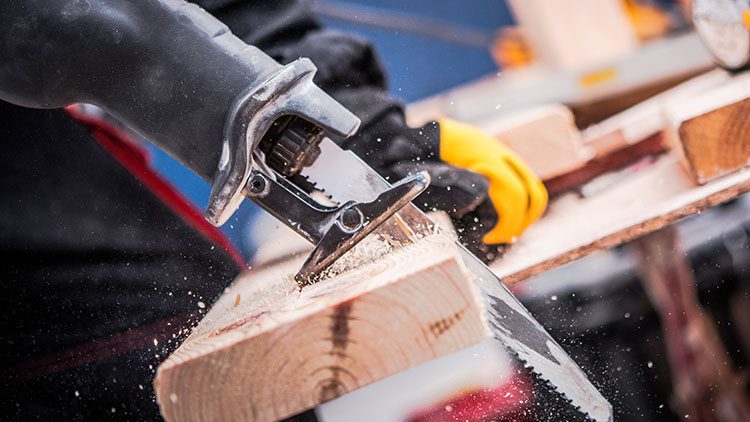 We’ve briefly touched upon reciprocating saws before, as they are the natural replacement for hand saws. Most DIYers will start with reciprocating saws because they are well-priced and can tackle a variety of different cutting jobs. Most reciprocating saws come with a selection of blades for wood, metal, and hard plastic, making them a more all-around cutting tool when compared to the others we have looked at.

The main issue with reciprocating saws is their tendency to leave rough edges on cuts. As the tool is handheld, there is more room for user error, meaning cuts may not always be straight. The tool can only make straight cuts, so a separate saw is needed if you’re looking to make mitre cuts.

Ryobi’s reciprocating saw is around £20 cheaper than some of the other main manufacturers, whilst boasting features the others do not. Ryobi’s saw has an adjustable shoe for easy manoeuvrability and a universal saw blade for cutting various materials. An equivalent saw from DeWalt or Makita costs around £140. 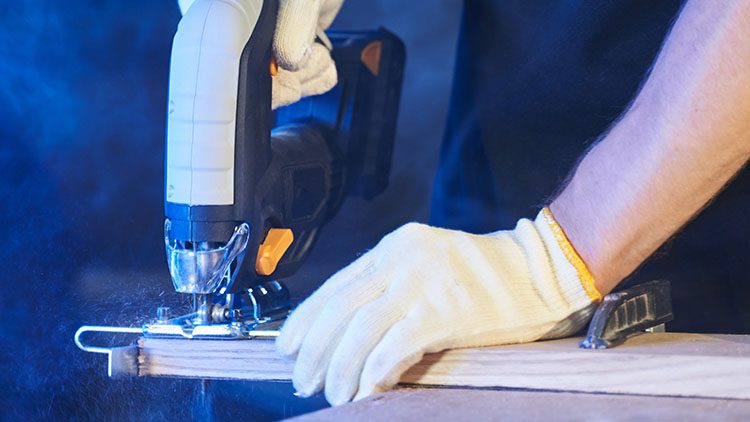 Finally, we have the jigsaw. Much like a reciprocating saw, the blade cuts using a forward and backward motion. However, jigsaws are more precise cutting tools and are mainly used for cutting shapes into large wooden boards. The size and position of the blade mean the user has greater control than if they were using a reciprocating saw.

Its other main difference from a reciprocating tool is the adjustability of the foot. Most jigsaws have a foot that can be set to certain angles, up to a maximum of 45 degrees. This means that they can also make mitre cuts. These cuts will, however, not be as clean or even as straight as cuts from a circular or mitre saw.

The saw you should buy will depend on your use cases for it. If you’re looking for an all-around saw that can do almost any cutting task, you can’t go wrong with a reciprocating saw. Circular saws and mitre saws should be used when you’re after clean, precise cuts. These saws are also great for repeated cutting tasks where you’re cutting several pieces of lumber to the same size. For any tree felling or tough garden maintenance, you’re best off with a chainsaw, and if you’re cutting any kind of complex shape from a board, go for a jigsaw.

Remember, if you’re looking to buy any tools from the Ryobi One+ range, don’t waste money on buying into a new battery system! Instead, invest in a Badaptor and use the 18V batteries you already own. A Badaptor can convert 18V batteries from either DeWalt, Makita, Milwaukee, Bosch Professional, Ridgid, AEG or Metabo CAS to work with the entire range of Ryobi One+ tools.

Get yours today at badaptor.com.

*Prices correct at the time of posting

New Ryobi One+ tools that pair perfectly with a Badaptor

Sign up for our newsletter to receive product news.

We're always on the lookout for exciting and enthusiastic companies to develop long lasting business partnerships with.

Will my Makita battery fit Ryobi tools?
New Ryobi One+ tools that pair perfectly with a Badaptor
Christmas gift ideas for an avid DIYer
4 cheap ways to save energy this winter
3 simple ways to organise your shed or garage